My love affair with rottweilers began in 1985 when I was in a park in Arizona.  From across the park a great big dog decided to come running full speed towards me!  As I braced myself for a crash, he stopped smartly in front of me, looked me squarely in the eye, grinned, and gently leaned against my leg.  I was hooked right then and there by his intelligent presence, robust look, and obvious sense of humor.  That day was the beginning of a series of relationships with the breed that will continue to have an impact on me for the rest of my life.

​      I had already begun an investigation into working dogs after losing my constant college companion, Kimo, a samoyed.  He'd been by my side throughout many hours of dance classes (my major), and graduated with a "Special Diploma" alongside me.  As I gained understanding of various breeds, I ascertained that I needed to find one that was amenable to training, had energy but was able to settle, easy to groom, protective if need be, and most importantly, one who could hang out with my dance students.

Beau was my first.  He was a talented obedience dog and taught me so much about the breed and their remarkable capabilities.  We moved to Vashon Island, WA in 1992 where I met Elfi Rice of Cannon River Rottweilers from whom I bought my first female, Calli (Cannon River Ferry Princess).  She became the foundation of my new breeding program.  Out of the first litter came my first two AKC champions, Bertha and Schooner.  (Bertha: Multi AOM Ch. Cannon River Kindred Spirit CGC, Winner of the 1996 American Rottweiler Club National Specialty 6-9 month regular bitch class, Best Veteran Bitch American Rottweiler Club National Specialty and Colonial Rottweiler Club Specialty.  Schooner: Ch Cannon River Proud Schooner CD CGC).

After that, I bought a home with two creeks and began breeding under my own kennel name.  Generations later, Twin Creeks Rottweilers has continued it's quest for excellence through its breeding program, training, being ambassadors of the breed, and by adding dogs of excellence to our family from other highly respected and successful breeders. 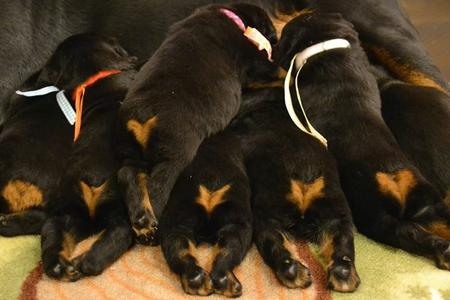 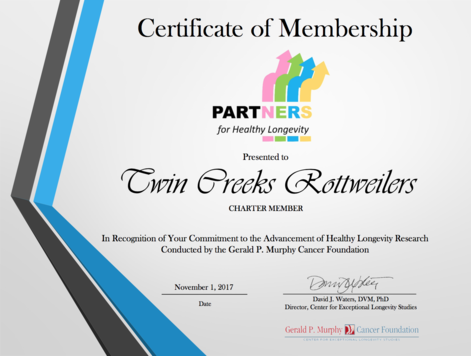